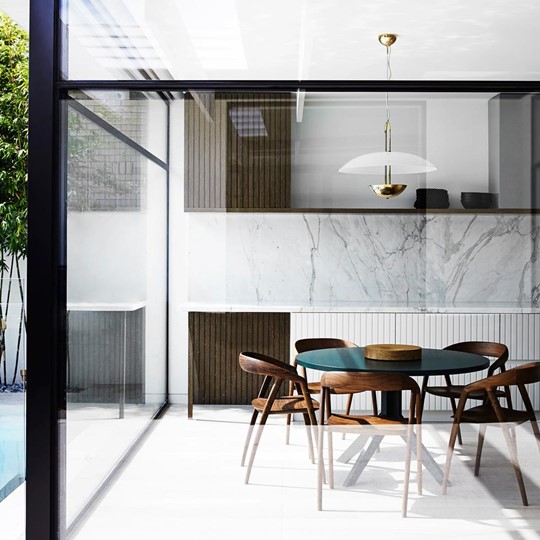 Serendipity played a big part in the owners acquiring this house, then an abundance of emotion drove its reinvention. By Belle magazines Homes to Love and Mim Design

We went for a walk and bought a house,” says Deborah Miller, who had wandered across the road to an auction in her street before serendipity struck. While admittedly “shocked and not entirely convinced”, Deborah says there was a sense of familiarity to the Harry Ernest-designed 1960s house she now shares with her husband David and their three children in the Melbourne suburb of Caulfield. “I was in love with my grandparents’ home and it reminded me a little of that. I knew it needed a lot of work, but it had beautiful bones and energy.

Adamant that its modernist soul be respected, the couple engaged Mim Design to re-imagine its contemporary appeal while maintaining authenticity. “It was like a family member,” says principal Miriam Fanning who, along with property development consultants Project Friday, oversaw a talented crew including architect Ben Robertson, landscaper Ben Scott and Adam Wells from ShadowLine Joinery. “We wanted a team that was as enthusiastic as our clients. Everybody took this house under their wing and went above and beyond. It was a complete love fest!”

he interior was dark, with disconnected rooms and no central hub, so the footprint was adjusted for the sake of flow and function, to open up communal spaces and embrace natural light for a “holiday feel”, says David, who referenced photographer Slim Aarons and his mid-century images of poolside parties. Together with Mim’s recent travels to Palm Springs, designer and client were riding a like-minded wave of inspiration.

The 60s house retains many of its original features including the terrazzo flooring in the entrance. The steel gate was rebuilt and painted white.
“It was midway between a renovation and a restoration, so wherever possible we tried to keep the feeling of the 1960s,” says Deborah who was insistent that the existing terrazzo slab floor in the entryway be retained. Wary of pastiche, Mim wanted “everything to have some reference to the era without it being retro”. With the help of master craftsmen, the steel gate was rebuilt and the front fence refurbished and updated with a lick of dark paint. Inside, the old pendant light in the meals area had its second coming, and the timber-lined ceiling in the master bedroom echoes the original soffits. Nods to the past have been re-interpreted with luxe 21st-century appeal, such as the new joinery unit in the formal sitting room which is modernist in spirit, but remade in walnut veneer.

The heavy front door, stamped with an oversized brass handle, opens to the generous foyer, leading into a large, light formal dining room on the right. Steel-framed double glass doors open into the front garden that Deborah has claimed as a kid-proof space. “It’s my little sanctuary and the only part of the house that doesn’t have children’s toys!” A concealed sliding door on the rear wall forms a passage through the butler’s pantry to the new open-plan kitchen.

The adjacent meals area was extended to accommodate grazia&co’s ‘Finnegan’ round dining table and to provide natural shading to the living zone and views to the pool which Ben designed to “provide effective visual sightlines, add[ing] drama and luxury to embrace the idea of the mid-century home”. The ceiling to the adjoining casual living area was ‘popped’ for height, and a custom unit with sliding panels cleverly conceals storage.

A slip corridor leads past the powder room and bathroom to the private, south-facing L-shaped spine of the home. Three bedrooms and a study branch off the hallway, culminating in steps leading down to the master wing at the rear. Once a cabana (so rarely used that its original globes were never changed and are still working), it has been converted into a parents’ ‘apartment’, with ensuite and walk-in robe. Doors lead to the rear garden with an outdoor shower, steam room and relocated pool, positioned for better views to supervise the kids swimming. Next up: an outdoor cinema in time for summer nights Palm Springs-style. “I always knew,” says Deborah, “there was just something about this house.”

0
0
Your Cart
Your cart is emptyReturn to Shop
×
Product Added !
Product Add to Cart SuccessFully